Lavendar and Pretty Girls in a postcard

This is the best season I had for my lavender plants probably because we had more than usual rain in central California.  This is the end of the season but the plants still have their blooms.  Even when drying on the plant itself the aroma is wonderful.  I cannot help but pick a stalk everytime I go by the plant.   So this evening I got a handful of flowers, grabbed my camera and a pretty postcard and snapped this photo.  Aren't digital cameras wonderful.  One thing I like about the summer is the warm evenings outside and I am going to take a walk tonight. 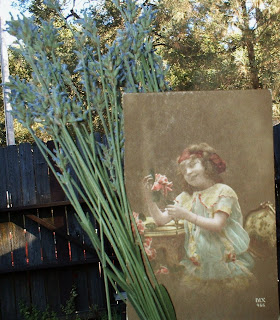 A walk up our driveway 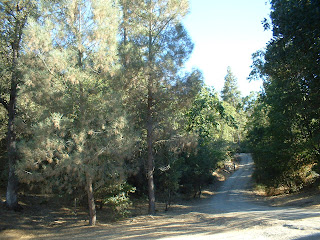 Pine Trees we planted.....they were 4 inches tall many years ago. 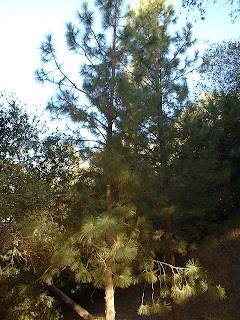 Hope everyone is having a nice weekend.  Can't believe tomorrow August is here.
Posted by papel1 at 7:27 PM 2 comments: 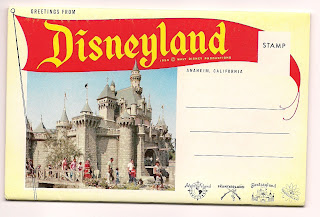 If you collect Disneyland memorabelia this postcard folder is for you.  It was published in 1955 the year the park was opened in Anaheim California.  On Auction at eBay
Posted by papel1 at 12:23 PM 2 comments:

I hope everyone is enjoying their summer.  School Days sure start earlier every year.  I hate seeing back to school sales in July.  A lot of the schools in California start August 16.  I think that is terrible.  They could at least wait til after Labor Day. The only nice thing is that when everyone starts school we usually take off on a trip.  And wave to the school buses as they drive by.
Posted by papel1 at 7:28 AM 1 comment:

Its Postcard Friendship Friday but only have time for a brief visit here this morning. So I am sharing 2 comic postcards.
http://thebestheartsarecrunchy.blogspot.com/
Visit this sponsoring blog to see more!!
At first I thought someone had written the words with a pen but I have decided they were printed on the postcards. 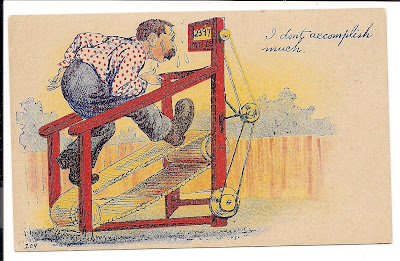 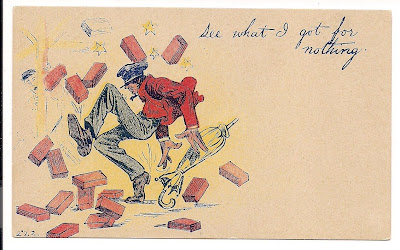 Map Postcards - How many states are in your collection?

I am sitting here scanning postcards and am discovering that I don't have my postcards in very good order. I have several boxes with sections devoted to the US states, some foreign countries, but I think I have more lying about in piles in every room of the house.  I was looking for postcards to go with my topic MAPS for todays blog.  I found one and its not very old but I like it and its colorful.

What I am thinking of doing is collecting a map postcard from all 50 states.  That should be a good quest for this very hot summer day.

How many states (postcards) do you have in your collection?

How do you organize your postcards?  All food for thought (and are you enjoying the summer?) 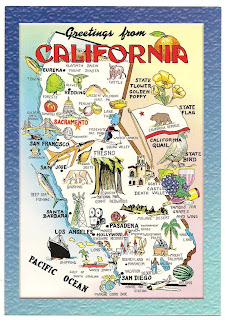 I have another blog about postcards....
http://judyspostcardsplus.info/


And I am working on a website also
http://www.judyspostcardsplus.com/
I have taken out a domain for variations of judyspostcardsplus....
But must get back to eBay!! And start listing again although its time to start RVing again.
Thank goodness for wifi availability on the road.
Posted by papel1 at 9:47 AM No comments:

What I am Doing in the Heat! Creative Projects 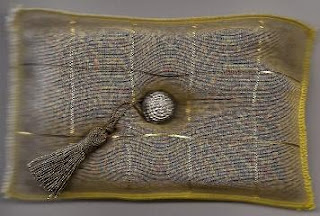 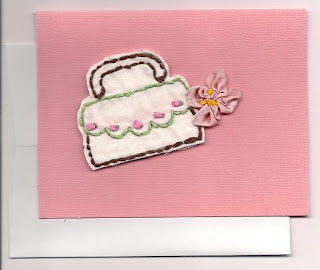 Jenny Hart of Sublime Stitching sells the most wonderful embroidery patterns.  Here I used a running stitch and made a cute person from her packet Dress Up, attached to a blank greeting card adding a vintage flower from an estate sale.  These are iron on designs and easy to do. 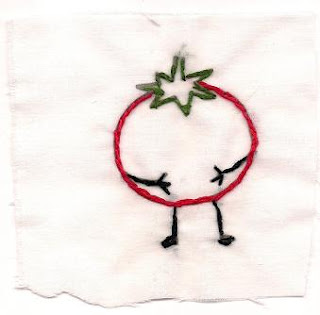 Not sure what I will do with this cute tomato.  Still needs some work.  This is from Subline Stitching I LUV Veggies.
Posted by papel1 at 2:17 PM 2 comments:

http://www.marylmartin.com/
Amazon.com also carries her books
Posted by papel1 at 10:37 AM 2 comments: 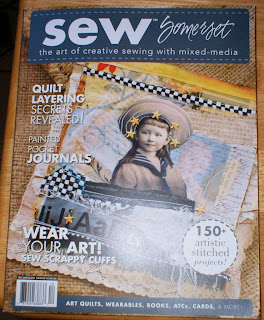 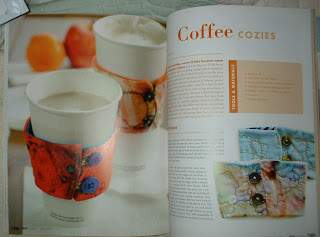 I have bookmarked about 5 projects in this issue.  I am going to make the coffee cozies soon.  Sew Somerset is more for the mixed media artists, as the projects are more for using your sewing machine and stitching collages, jewelry, book covers, fabric cuffs and these coffee cozies.
Posted by papel1 at 10:20 AM No comments: 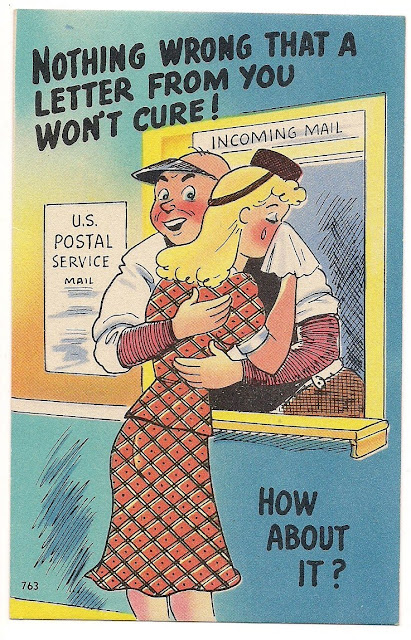 This postcard caught my eye this morning as I am headed that way soon.  I cannot live without the post office.  If I don't have good mail waiting for me I am depressed!   But times have changed.  I know a fun package is waiting for me from my friend Nancy as delivery confirmation on the computer says its waiting for me at the PO.   It has fun craft goodies for my niece and some postcards.  I had better get going.
Go over the this blog for more PFF entries.
http://thebestheartsarecrunchy.blogspot.com/
Posted by papel1 at 11:17 AM 12 comments:

Tillamook Cheese is one of the worlds finest Cheddar Cheese producers. You can visit one of the worlds largest cheese plants, located on Highway 101, 2 miles from Tillamook Oregon. During visiting hours to their center you can watch the cheesemakers and packaging staff at work most days of the year. While watching you were love the aroma permeating the air. And best yet you can sampe the delicious cheese. 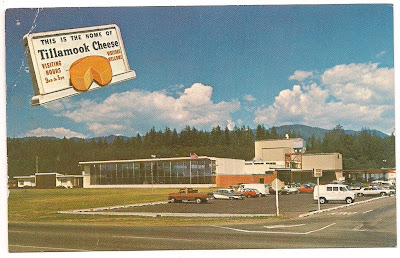 I have read many articles by Rice Freeman Zachery.  I imagine this book is very good.

Most recently the author of the best-selling Living the Creative Life, Rice Freeman-Zachery writes regularly for Somerset Studio, Belle Armoire, Legacy, Art Doll Quarterly, Belle Armoire Jewelry and Altered Couture. She is well known for her artist profiles and interviews
Posted by papel1 at 8:12 AM No comments: 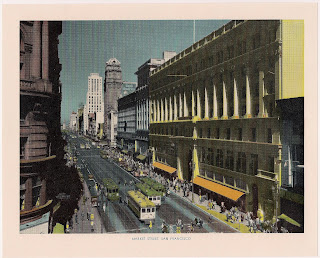 Market Street in 1944.  This is part of a series of photographs of San Francisco, California called Glamorous San Francisco in Color, This folio contains sixteen colored views of points of interest in San Francisco Reached by Southern Pacific Lines.
Published in 1944 the National Color Press, S.F.
Posted by papel1 at 5:27 PM 1 comment:

Happy Fourth of July
The background is a quilted flag wallhanging I made.  What better way to celebrate the Fourth is to appreciate the beauty of the United States.  This postcard shows the Teton Range across Jackson Lake in Wyoming.  Jackson Lake is one of the most beautiful lakes in Wyoming.  From near the town of Moran the visitor beholds the entire northern part of the Teton Range with Mt. Moran here rising to 12,594 feet above sea level. 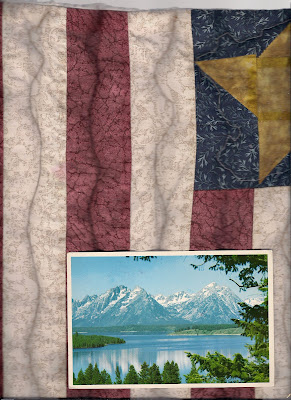 http://thebestheartsarecrunchy.blogspot.com/
The sponsor of PFF  Check out to see what other postcard collectors are sharing.
Posted by papel1 at 9:10 AM 11 comments:

On July 17, 1955, Arco, Idaho became the first U.S. town to be powered by nuclear energy. The demonstration lasted for one hour in the 1,350-person community. The National Reactor Testing Station, now called the Idaho National Engineering Laboratory, supplied the power from its Borax-III reactor. It was part of the Atomic Energy Commission's (AEC) Five-Year Reactor Development Program in the mid-1950's. The AEC tested five types of experimental reactors. The Borax-III was an early prototype of a boiling water reactor, a type of reactor which still produces electricity for utilities today.  This information is taken from  this web site.
http://www.radiochemistry.org/history/nuclear_timeline/50s.html 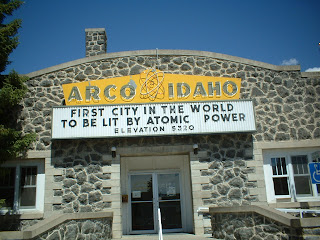 I took this photograph when driving through Arco on the way to the Craters of the Moon, a fascinating place, 26 miles from Arco, Idaho 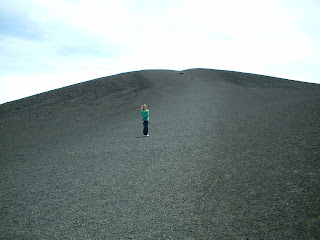 This is a cone mountain, fine pieces of lava piled quite high in Craters of the Moon National Monument.  I climbed part way, rather slick and steep.
Posted by papel1 at 5:11 PM 3 comments: