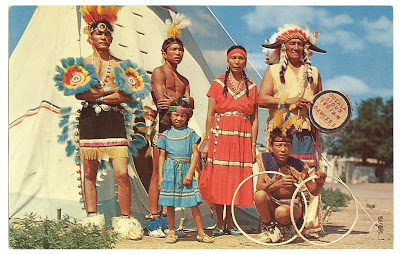 Sioux Whitecalf and his troup of Indian Dancers. They return every year to Ogallala Nebraska once the hunting grounds of the Oglala tribe. Visitors to Nebraska can see the different ceremonial dances performed. This postcard is from the 1950's or early 1960's. 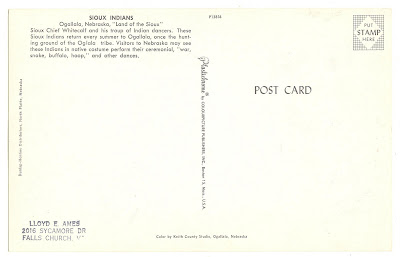 The Blue Mosque also known as the Sultan Ahmed Mosque is located in the largest city in Turkey,, Istanbul. I visited this wonderful mosque when I was a young teacher on a US Military Base in 1967 near the town of Karamursel, about 2 hours away from Istanbul. It got its name Blue Mosque from the colorful blue tiles on the walls inside. It was built in 1609 during the rule of Ahmed I. While still used as a mosque it has become a popular tourist attraction of Istanbul Turkey. (I have seen the Sultans name spelled either Ahmed or Ahmet) 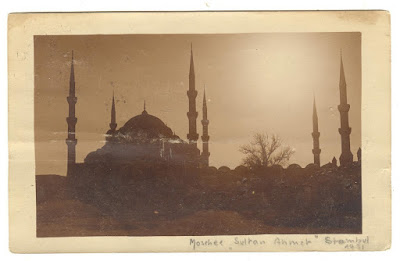 Here our host nation teacher is showing bread cooking in a hot Turkish Oven. The second graders enjoyed the trip and got to sample the bread. 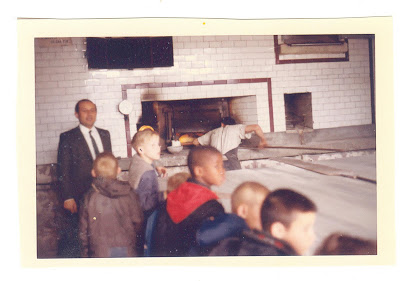 This is the main street of the town of Karamursel on the Sea of Marmara. The closest larger city would be Yalova. Parked on the side of the street is the Military bus which was our school bus. These field trips were fun for the class and very educational. Unfortunately this area of Turkey had a devasting earthquake over a decade ago. I remained on the base for one year with many side trips on the weekends. The highlight of my trip was seeing the whirling dervishes in Konya. At another time I will share a photo of that. (From there I went to England for 2 years, then home) 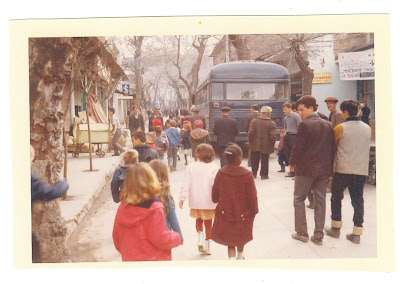 To see more entries for this week Postcard Friendship Friday go to http://www.cpaphilblog.com/

Bid on that Montana map if you want it

I already have a bid so last chance. But then again I buy postcards and ephemera if anyone has anything to sell!! Just leave me a comment.
Posted by papel1 at 3:46 PM No comments: 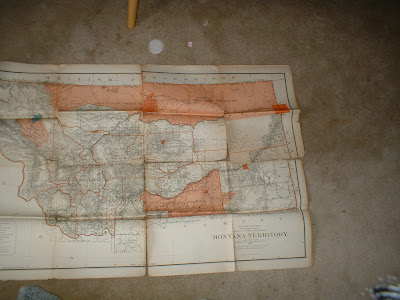 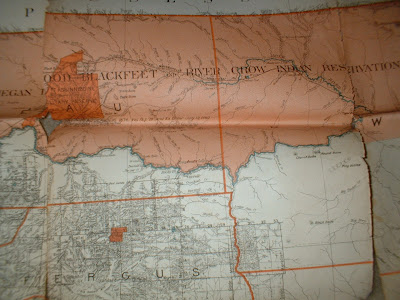 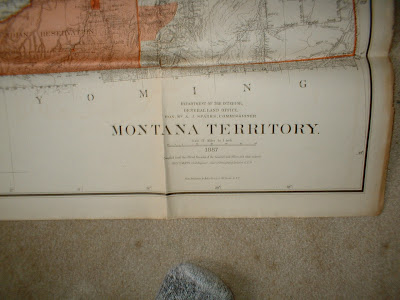 This map is in pieces (well almost) Want to try your hand repairing it. Buy this on ebay and try the challenge!http://cgi.ebay.com/ws/eBayISAPI.dll?ViewItem&item=220547446551&ssPageName=STRK:MESELX:IT Low opening bid of $3.00 If only I could repair myself like this map. It is old. I am also listing some old and decrepid Montana newspapers on ebay. 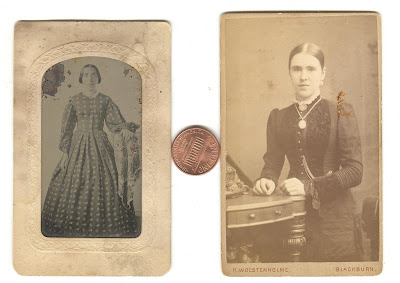 I think the tintype on the left is very old probably 1860s or 1870's. It is a paper frame around a tin photograph. It seems in so many photographs the people are leaning against a post or desk like the lady on the right. 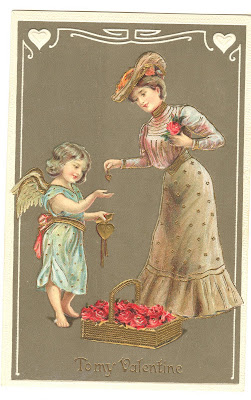 This lovely lady is being visited by a child angel who has given her a rose from the basket. Looks like they are exchanging heart charms. Its a little early but Happy Valentines Day.
Posted by papel1 at 10:06 AM 2 comments: 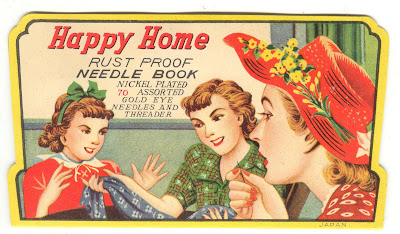 I was pleased to find a needle case with all the needles intact and the threader. 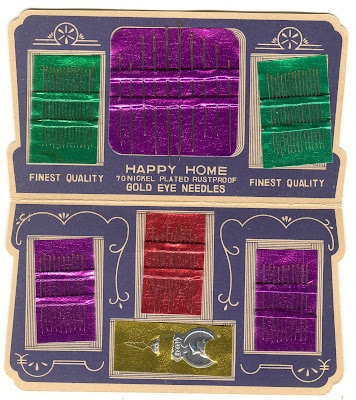 I love old vintage sewing vintage items, needle cases like this one, or buttons, feedsacks, old patterns, pincushions, so much to collect. 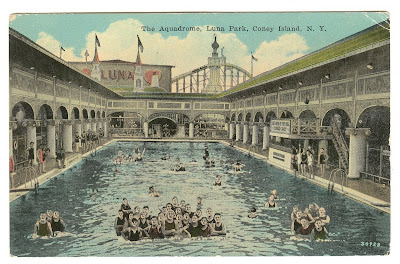 Each week I keep adding a few more postcards of Coney Island. I love the posed swimmers in this pool.
The Aquadrome is the largest salt water swimming pool in the world (back in the day) Despite its size the water is changed twice daily. (what no chlorine) Once during the day & when the park closes at which time the tank is entirely emptied, tiles, walls and concete thorougly scrubbed with a sanitary preparation.
For more PFF visit Marie at http://www.cpaphilblog.com/
Posted by papel1 at 11:00 PM 10 comments: 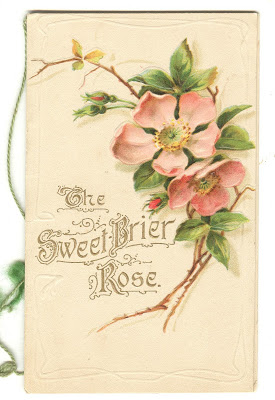 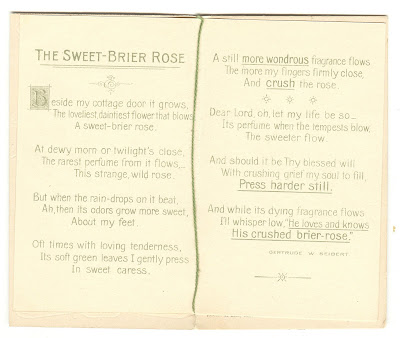 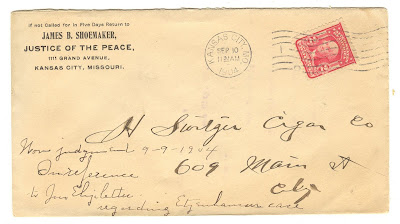 Cover Collecting has been a hobby and business for many years for many people. Instead of saving just the stamp you save the entire cover. Usually they are sold without contents, but if the letter is with the envelope that is even better.

I chose to share this cover as it has an interesting notation about a case written on the bottom.. It is hard to read but is something like....won judgement 9-9-1904 in reference to Jim Elijeletter regarding Etyenhausur case. I cannot read the names so guessed them.

I don't know if the Judge or H. Switzer wrote the notation. Mailed by James B. Shoemaker, Justice of the Peace, 1111 Grand Avenue, Kansas City Missouri

Is there more than one Billy the Kid? CDV for PFF 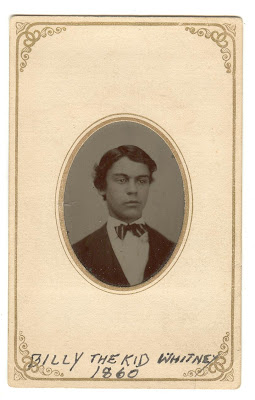 This carte de viste (CDV) intrigued me. Thought I might have something rare. Ha, the real BILLY THE KID was a baby in the early 1860's. The odd thing is that the famous Billy the Kid murdered one of his victims with a Whitney gun. Odd coincidence. 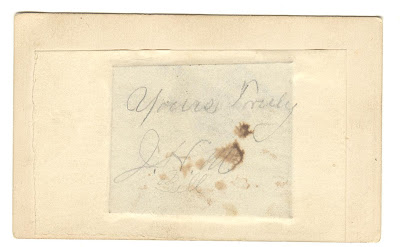 On the back of the CDV someone taped the not so famous Billy the Kids autograph. I have acquired lots of CDVs and some Cabinet Cards which are just as interesting as postcards. Happy Postcard Friday, a little early but have lots on my calendar. Go to Maries blog to see what others are sharing for PFF. 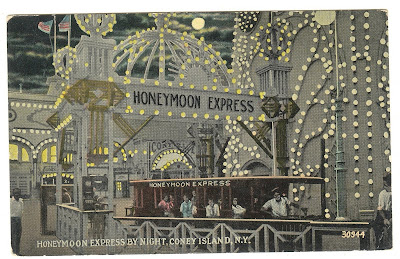 The Honeymoon Express is located in Luna Park, Coney Island. It is one of the worlds largest playgrounds containing hundred of electrical devices and at night is the most brilliantly lighted spot on the island.
Posted by papel1 at 3:19 PM 3 comments:

These forms of transportation were called Rolling Carts. Here a live person pushes you along the boardwalk at Coney Island in New York City. When the postcards could be mailed for a penny they became very popular. 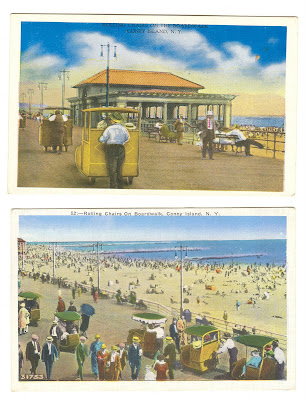 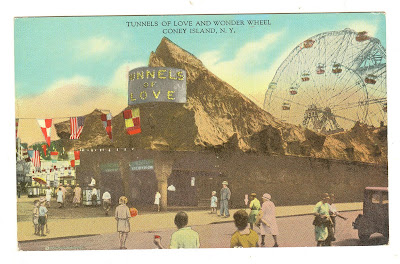 Tunnels of Love and Wonder Wheel which is what we call a Ferris Wheel. 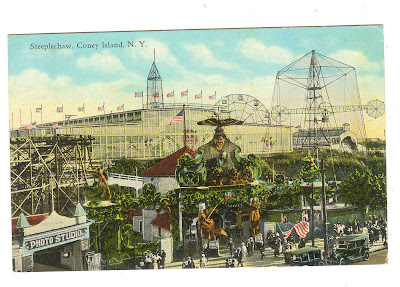 Visa for travel to the Moon, Postcard Friendship Friday 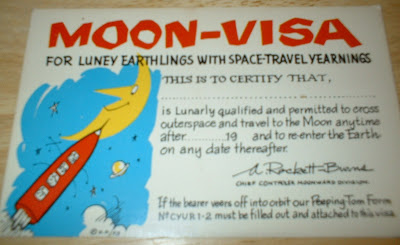 MOON-VISA For luney earthlings with space-travel yearnings
This is to certify that.......................is Lunarly qualifed and permitted to cross outerspace and travel to the Moon anytime after.......19 and to re-enter the Earth on any date thereafter.
Signed by - A. Rockett-Burns Chief Controler Moonward Division
If the bearer veers off into orbit, our Peeping Tom Form No CYUR 1 -2 must be filled out and attached to this visa.
This humorous postcard is copyrighted 1959
A Dexter Press Postcard.
Happy Postcard Friendship Friday and to see more go to http://www.cpaphilblog.com/
Posted by papel1 at 9:05 PM 13 comments: 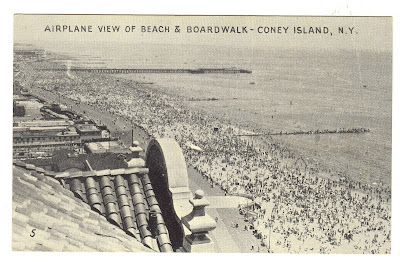 Tips for Selling on eBay

http://www.ebaysellingcoach.com/f/eBayCoachRefGuide.pdf
Posted by papel1 at 10:39 AM 2 comments: 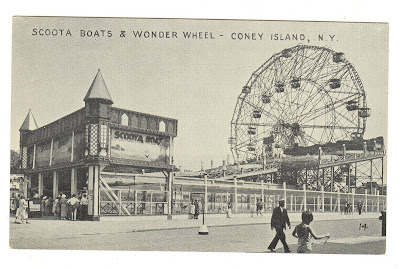 Coney Island is a pennisula formally an island in the Southernmost part of Brooklyn New York. It has a beach along the Atlantic Ocean. It formally opened after the Civil War and was very popular until WW II when it declined in popularity.
There were many postcards sent from Coney Island especially when the penny postcard became popular in 1898. Even though there are hundreds of different postcards from C.I. they are quite collectible.