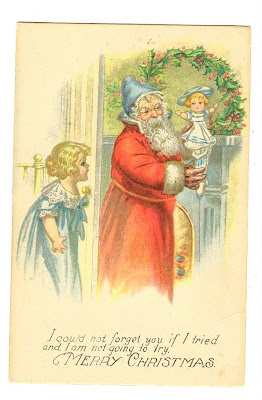 I just bought this darling Christmas postcard. This cute little girl has opened the door to find Santa with a toy doll. What a surprise visit. 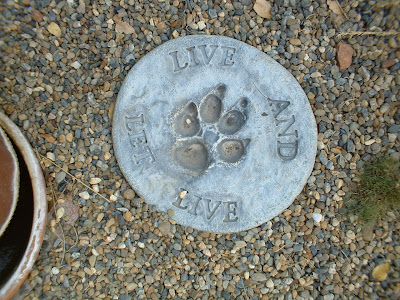 It is just too nice to spend time sitting inside and typing away on the computer. So off to the Feed Store to buy some herbs for the garden. I have some catnip in a pot that is squished and torn by my two cats jumping in the pot, nibbling at it, rubbing their nose on the leaves and taking a nap. So I am going to buy them some more, plus a few lavender plants. Oh they smell so good. 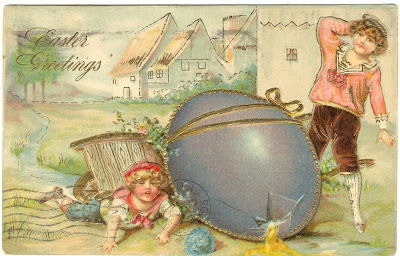 I think this boy may have been pulling the Giant Egg on that cart along with the boy and off he fell. He doesn't look too happy on the ground. Below the two girls are chatting away riding on an egg along with a bunny and don't look worried at all! The boy pulling the egg and cart looks a little concerned. I wonder what both boys are thinking about as they pull! To see Maries Easter postcard as part of Postcard Friendship Friday go to http://www.cpaphilblog.com/ 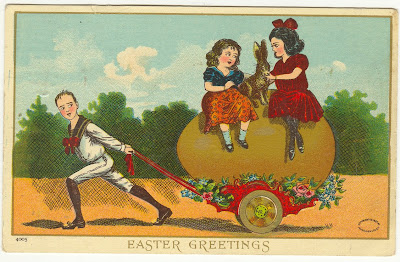 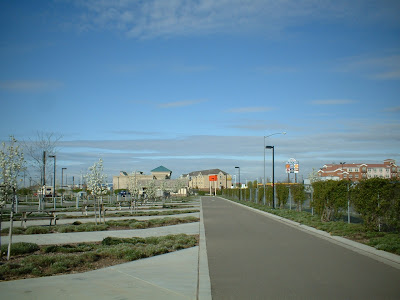 In the distance you can see all the amenities we had near Flag City RV Resort, Closest building was a Starbucks, then every fast food place you can think of . I didn't get a picture of the Flying J Truck Stop which is to the right. A popular RV park for groups. Off of Highway 5 South of Sacramento. On a day of being tourists we went to the Bass Pro Shop in Manteca. What a place. I should have taken a picture! 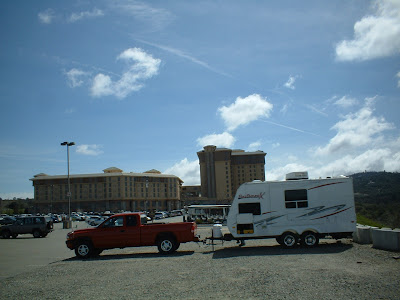 Leaving the $ behind as we get ready to leave the casino RV section. They let you sleep at Chukchansi as long as it looks like you are visiting inside. A great stop on the way to Yosemite.

Well I neglected my blog as we traveled around Central California. We wondered why our RV park was rather quiet for overnighters. They were all at Flying J Truck stop at Flag City. They let you stay overnight for free, while we paid for the comfort of hookups. There was a Good Sam RV club from Sacramento over the weekend and there were over 50 rigs (in the park not the truck stop)and pricey ones at that. But we will like our small 19 footer. But we did eat at the buffet twice at the truck stop and it was good. As we were traveling south not sure where we would sleep that night the ABS break lights went on but we were near a Dodge dealer and they fixed it late in the day for a nice sum. We decided we were so broke anyway why not sleep the last night at the casino in their designated RV area. We ate leftovers etc in the trailer and tried our luck well.......now we are home and I am getting better directing the parking of the RV in a tight spot. Our new 2 way radios help. Maybe I will post a picture later. Oh yes we had our trailer and truck washed at a truck wash where they do it for you. I was with the big rigs. Trucking on.
Posted by papel1 at 2:56 PM 1 comment:

Have you noticed that they are not building any new single story old fashion style motels? At least I notice most of the newer motels/hotels are 2 story with hallways. I remember we liked to park outside the room we booked so we could keep an eye on the car. 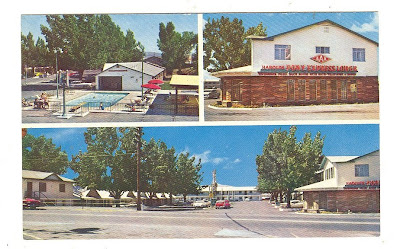 Crookedest Street in the World 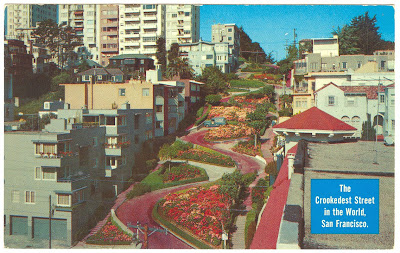 This is a tourist site in San Francisco, California, Lombard St. I think cars can still drive down one of the steepest streets in this lovely city. 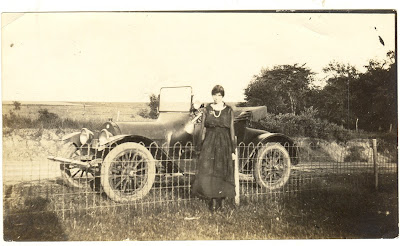 Its Postcard Friendship Friday over at Marie Reeds Blog. http://www.cpaphilblog.com/ She is sharing a postcard of the most expensive shoes I have ever seen. I have no postcards of fashionable shoes so chose one of a fashionable lady by her fashionable car. 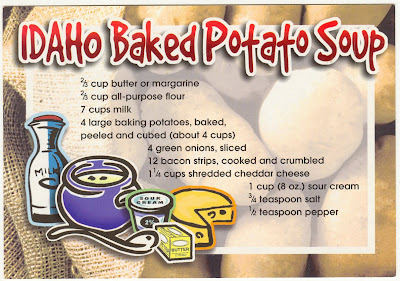 The Idaho potato is any potato grown in the American state of Idaho, but one variety, the Russet Burbank, has come to be closely associated with Idaho. When most consumers think of Idaho potatoes, they visualize the Russet Burbank, a classic starchy potato which has a wide range of uses. Idaho has come to be linked with potato production in the United States, and it produces one of the largest yearly crops of potatoes in the United States, after Washington State......To read more about the Idaho potato go to http://www.wisegeek.com/what-is-an-idaho-potato.htm I love potatoes.....baked, mashed, hash browns, Fries....even Potato Soup.
Recipe Postcards are fun to collect and available in most gift, drug, souvenir stores.
Posted by papel1 at 3:39 PM 3 comments: 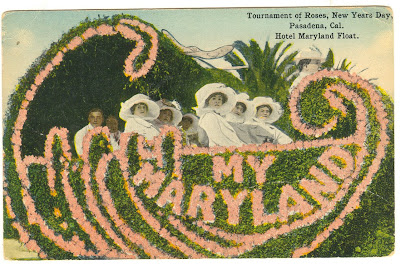 Growing up I always watched the Rose Parade from Pasadena Calif. on TV before the big football game. I actually got to attend the parade as a child several times. Forget the traffic! We boarded a special bus in Santa Monica and headed to Pasadena. It was fun to walk around and look at the beautiful floats after the parade, before boarding the bus back home. 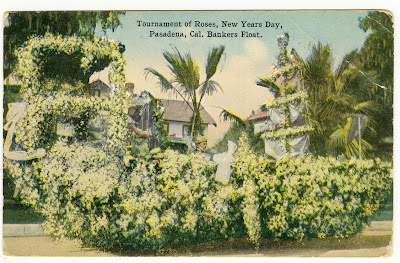